My first career was almost the foreign service.  Reading articles like this, a fascinating 1994 interview with Ambassador Joseph Lake about opening the first US embassy in Mongolia almost makes me wish I’d followed through with that.

It is all the more interesting because I showed up on the scene three years later and knew some of the folks he mentioned – and was in the same office space.

And Now For Something Completely Different….

It’s been a bit of a tradition to blog up some of our more ambitious family vacations, and this blog commemorates our 2015 trip, just completed.

As a bit of background, as most of our regular readers may know, my in-laws live in Ulaanbaatar, Mongolia – as do most of my wife’s family.  We also happened to meet up and start dating when we both lived in Beijing 20 years ago.  Hence, we tend to schlep the kids over to that part of the world every couple of years to connect them with their roots and expose them to our past.

This time, and I realize that this sounds a bit redundant, we figured if we were going to Mongolia anyways, we should make a real trip out of it.  Hence, as I worked through the vagaries of international ticketing (there are no direct flights from the US to Mongolia), we ended up with an itinerary that circumnavigated the globe via Turkey, Kyrgyzstan, Mongolia and China.  (Props by the way to anyone who knows which one of those countries doesn’t belong in the same category as the other three.)

What’s there to say, but Istanbul is our new favorite city (I know, we say that about all cities.) We did learn that when the kids are about to self-destruct from a toxic cocktail of jet lag and cultural overload, we could frog march them into the visitor section of the nearest mosque – where they’d have to remove their shoes and sit on the carpet quietly till they settled down.  It’s a tactic we’ll have to reuse on trips going forward (although it doesn’t work so well in Tibetan monasteries due to the noise).

From Turkey, en route to Mongolia, we stopped for a couple of days in Kyrgyzstan.

My wife and I both got to exercise our Russian language skills (Hers is high school.  Mine is a smattering of random Mongolian accented nouns.) 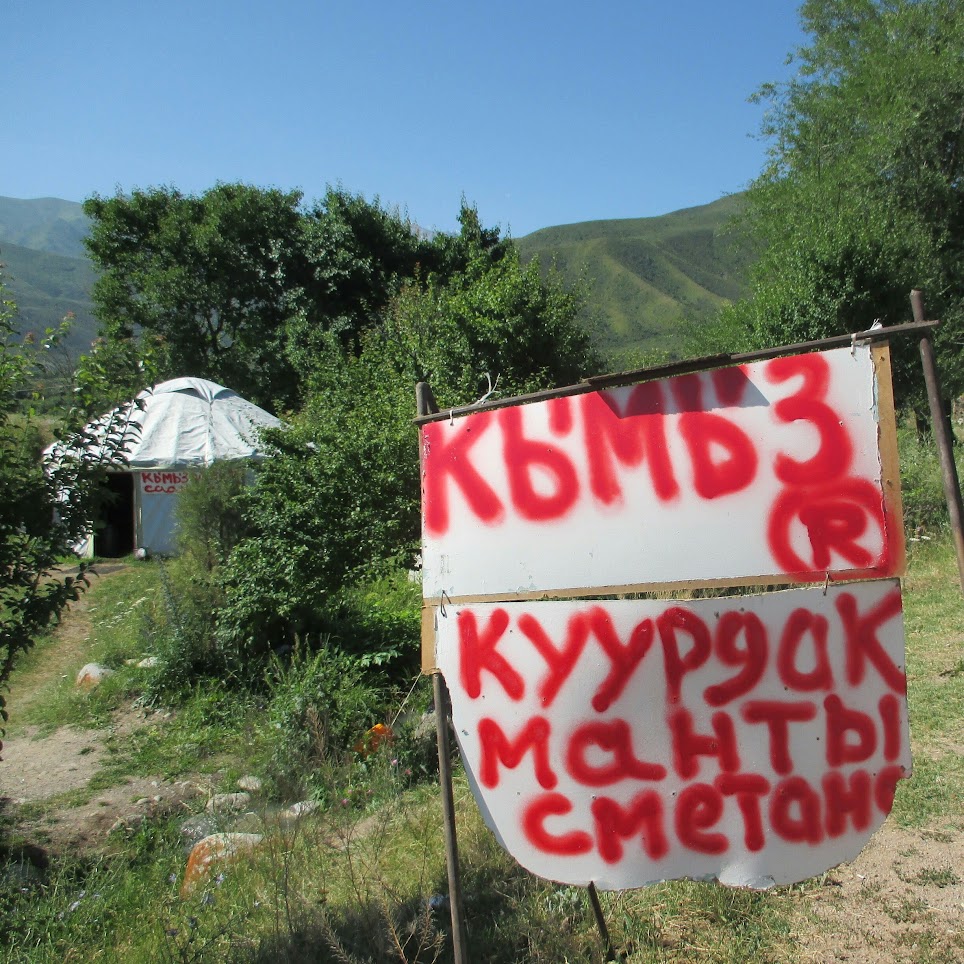 …and we were able to meet up with an old friend from university who’s now working in Bishkek.

It’s a great country full of great people.  That being said, to be honest, if I had to pick one Central Asian country to visit, I’d still go to….

…where we landed right before the annual Naadam festivities kicked off.  (Naadam, of course, being a celebration of Mongolian culture that happens every summer).  We hit Sukhbaatar Square to see the rehearsal of the evening concert. 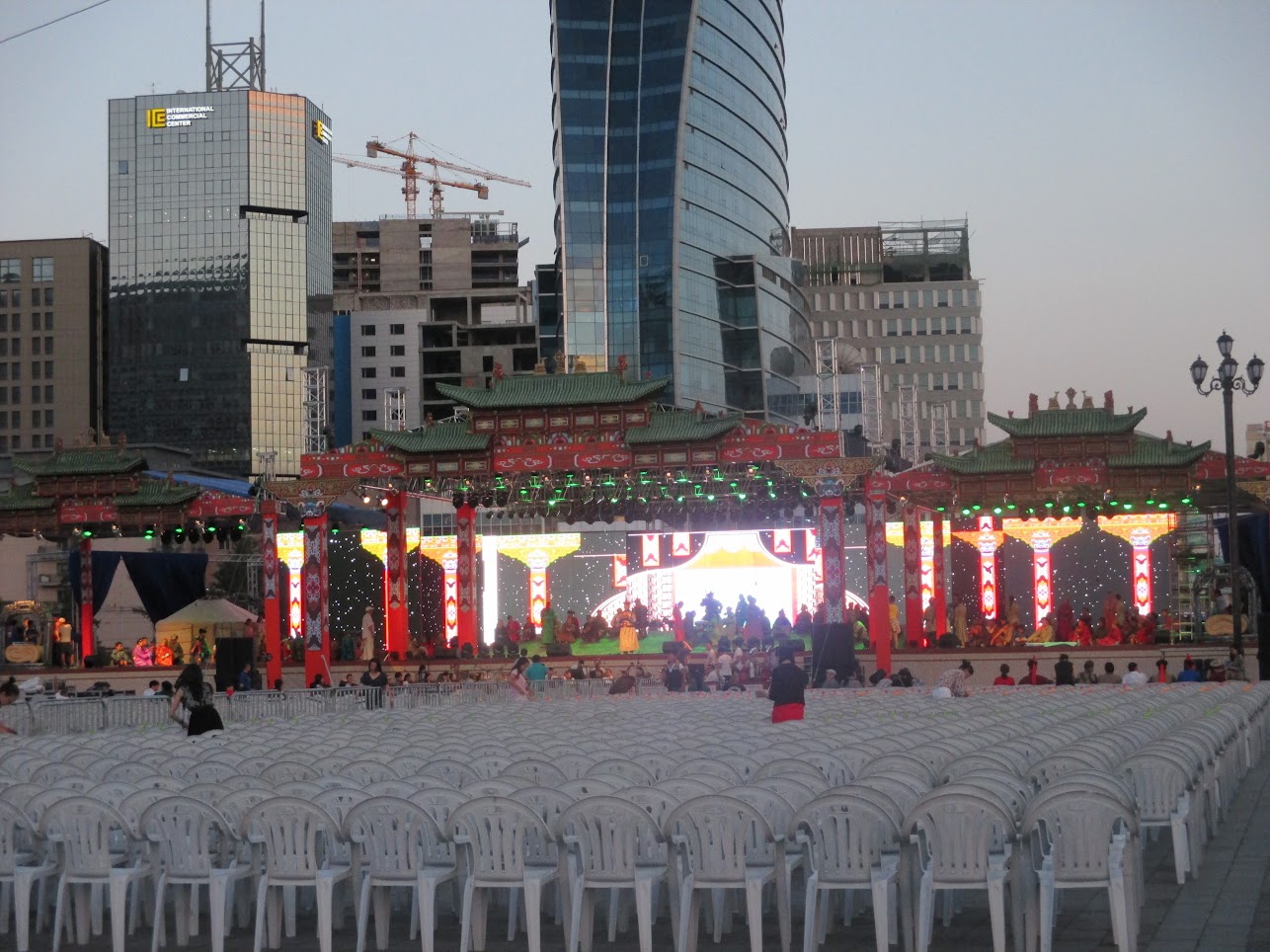 Then, thanks to an awesome sister in law, we scored tickets to the opening ceremony in the national stadium. 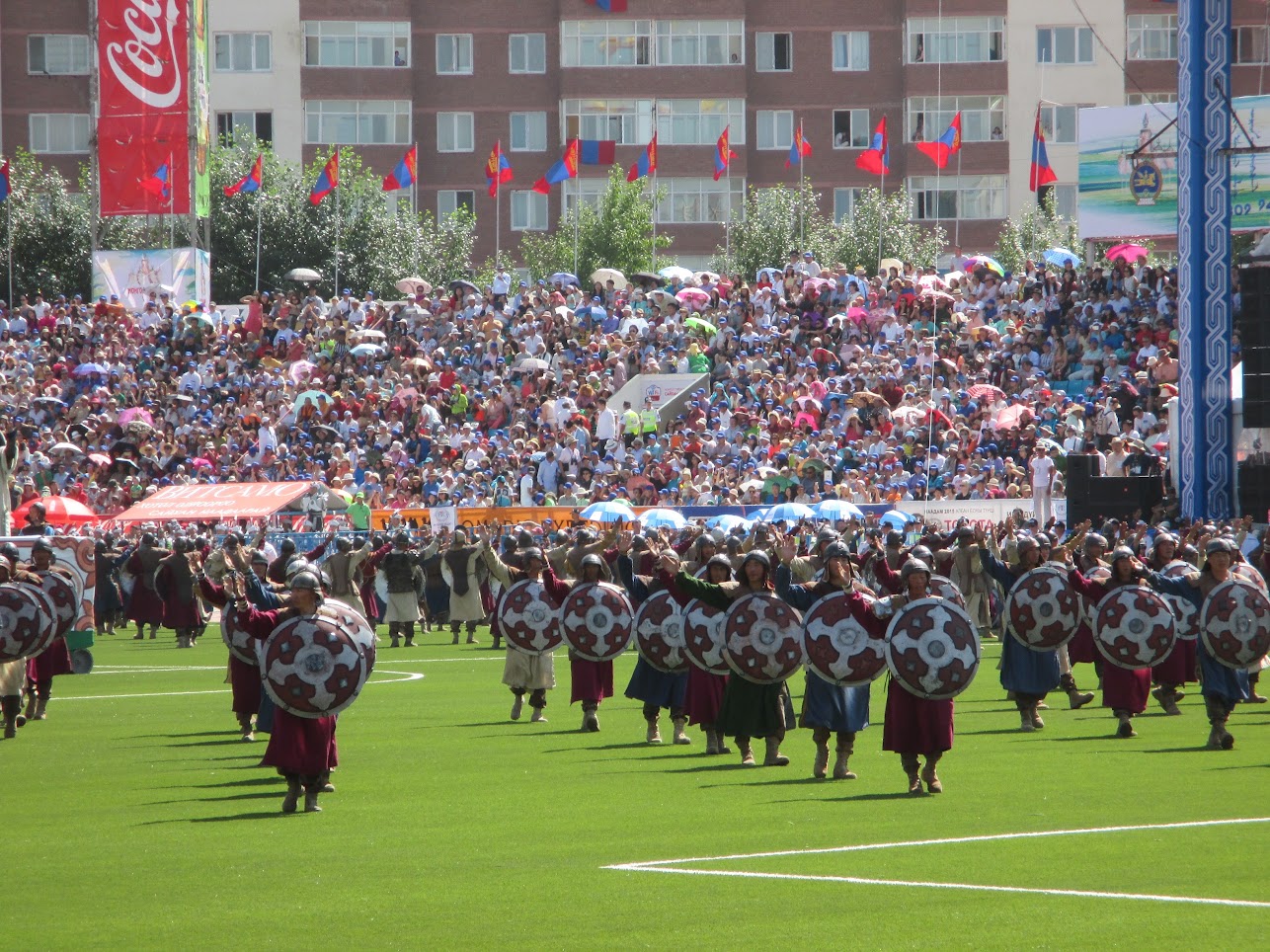 And I was introduced into the coolest traditional game I think I’ve ever seen, shagai harvaa.  It’s played by launching dominos about 6-7 meters through the air to knock down the target (below) while everyone chants in a monotone. 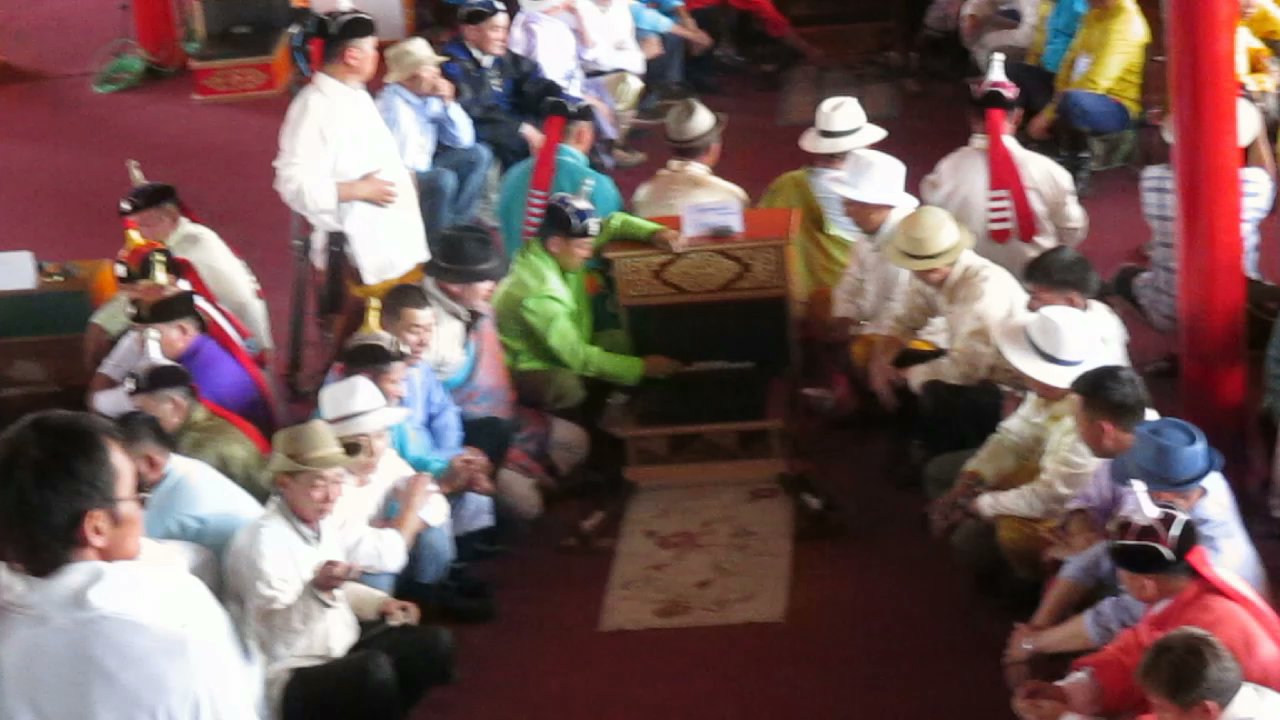 After another couple of days in Mongolia (a minor bout of food poisoning from some fermented horse milk, a trip to what is basically a Buddhist amusement park, and a lot of vodka), it was time to dust off our rather rusty Mandarin and head to….

…for a couple of days of meeting up with friends and looking for that old Beijing culture.  Note how clear the air was on this visit to Jingshan Park (really….last time we were there, you couldn’t see that far): 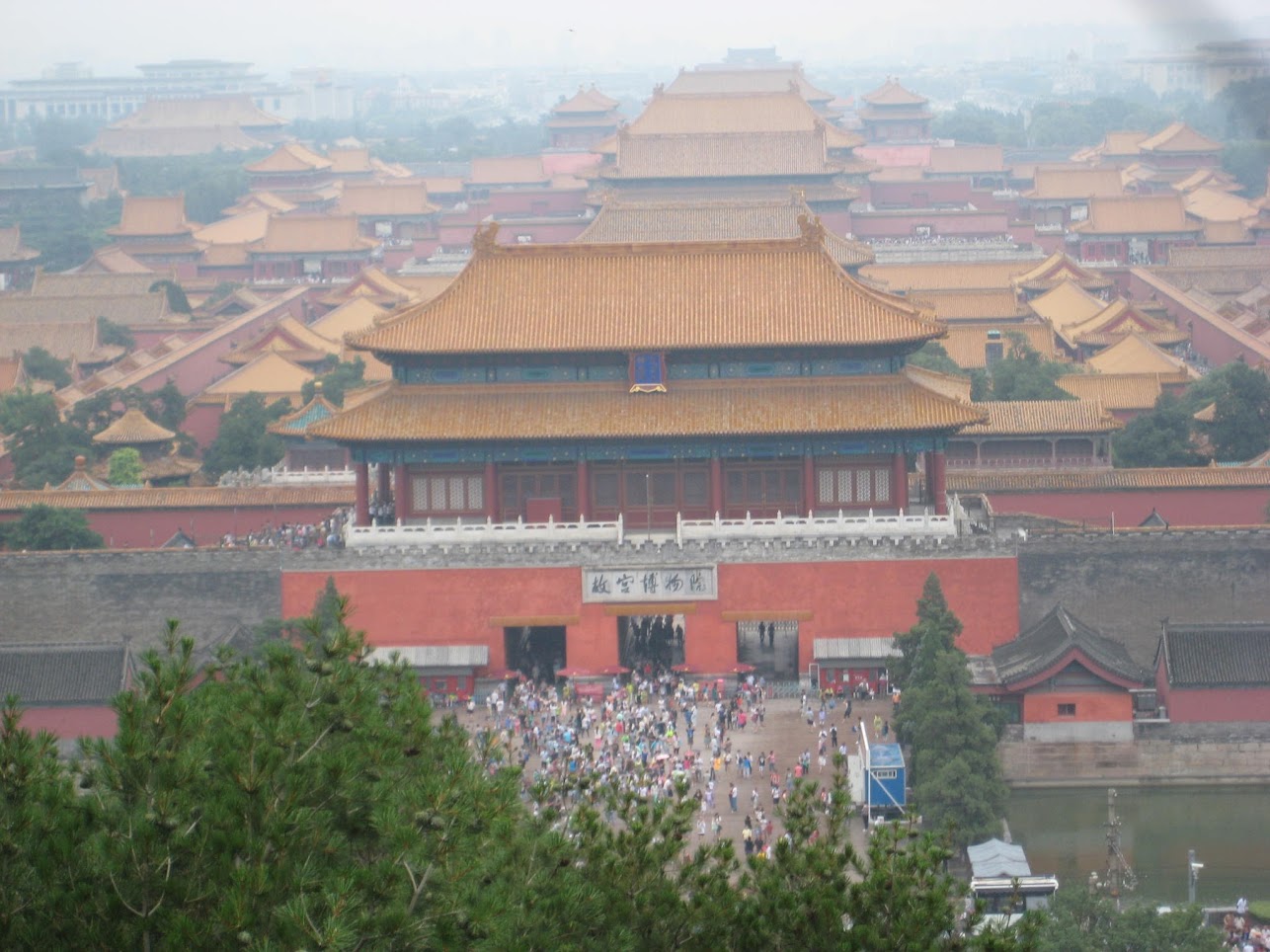 We hit our old digs in the Peking University campus…. 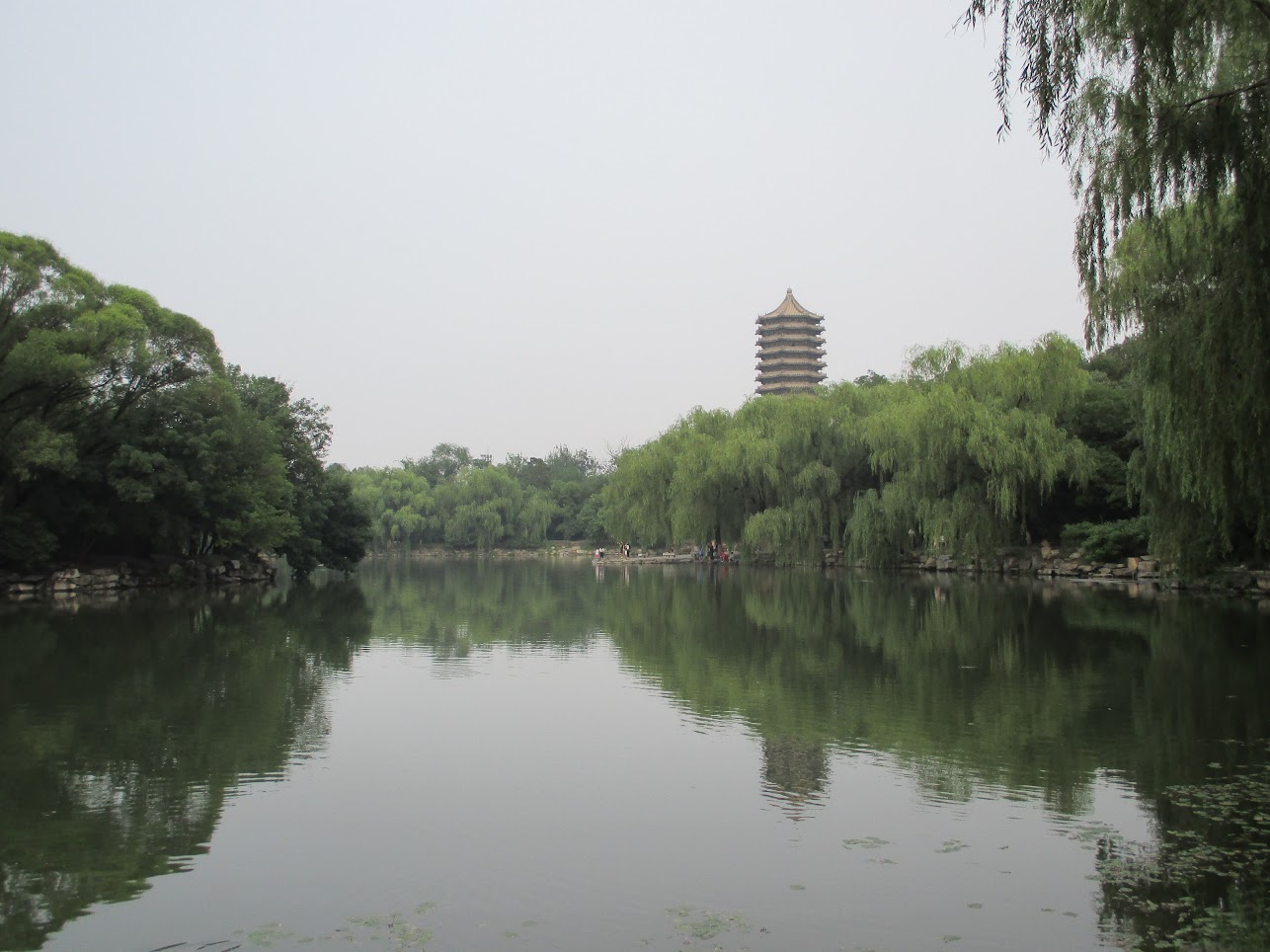 …and closed it out with a visit to Beijing’s resident roller derby team, the Rickshaw Rollers….

All in all a nice trip – and a solid excuse not to have blogged much over the last couple of months.  Now, however, that excuse is gone, and I’ll work to pick up the blogging pace.

Come on out to Microsoft’s offices to see what’s next in project and portfolio management.  For more information and to register, please check out this link:

Looking to learn more about how Microsoft’s Project Online will support your strategic project portfolio management capabilities?  Come on out to Microsoft’s Tempe office next Thursday afternoon (10/16) where I’ll be leading a hands on session on the topic.

Please join us for a half-day session to explore how Microsoft Project Online can transform your approach to Project Portfolio Management.

This session is a chance to hear about Project Online, Microsoft’s best in class Project and Portfolio Management solution. Project Online is used by leading organizations around the world to align tactical execution with strategic goals.

Key themes that will be covered include:

•    Visibility into your portfolio in the cloud from anywhere and ensuring that work is authorized and reflects the priorities of the business.

Heading to Tempe on October 16th!

Sorry for not posting in a while.  Having a bit of a role change, starting with a new client, travelling, vacations, conferences, blah, blah – which has sucked up all available bandwidth for a bit.

Interestingly enough, I note readership seems to go up the less I write.  Not sure what I can conclude about that.

There’s still a hefty backlog of posts just waiting to be written however.  In the meantime, thanks for reading and for all of the great comments and questions.

Hence my list is basically culled from the list of what other folks have told me that I should see.  It’s a good start, I suppose – and not intended to disparage anyone’s presentations that didn’t make the list.

Gartner Shares the Most Important PPM Trends for 2014; Donna Fitzgerald and Ben Chamberlain.  If you’re a PMO director or often called to play the role of one, make sure to see this presentation on how to do portfolio management – and make sure you have your Amazon account open on another screen and a credit card handy as you’ll be buying a number of books after this.

AWESOME User Experience for PWA From a Great Visual Design; Dariana Kestenholz and Mathias Laegdsmand – A simple way to drastically improve the look and feel of the main PWA site – and thus drive user adoption.

Real World Reports: Business Intelligence in Project Online and Project Server 2013; Mike McLean and I skim a rock over options for reporting against online and on-prem installations.

This is by no means an exhaustive list, there’s plenty more where that came from – including a vast array of customer case studies and technical chalk talks.

My Picks from Project Conference 2014
Project Epistemology
Create a free website or blog at WordPress.com.